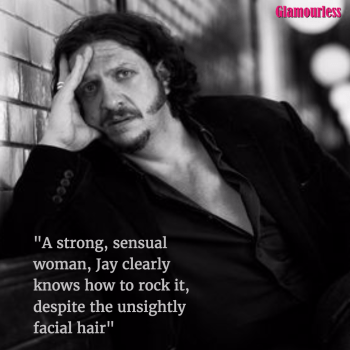 Never what you’d call a classic beauty, there are few women who carry themselves as well as Jay Rayner does, and – considering what she’s been through in life – we think she’s a role model the nation should be proud of.

A strong, sensual woman, Jay clearly knows how to rock it, despite the unsightly facial hair. What’s more, Jay has written some great books, proving she’s a woman with a brain, not just a massive piece of ass.

Yes indeed, there are far worse people you could base your life philosophy on than Jay Rayner. In the first of a new Glamourless series, we explore how we’d go about being less like ourselves and more like other people.

In 2011, Jay Rayner won ‘Beard of the Year’, an award presented by a bunch of jokers who clearly felt she was an easy target. According to Channel 4’s Embarrassing Illnesses website, one in 10 women suffer from acute hairiness. We think the way in which Jay has dealt with her condition is to be applauded rather than ridiculed. More power to your hairy elbow, J-Ray!

2. Learn to make do with what you’ve got

Not exactly the sexiest woman in London, Jay more than ‘gets by’, and she’s done it by flying in the face of sense. Instead of cowering away from the light of day, she took that plus-sized body of hers and made it get a job eating food. The first woman ever to have dared make a living piling on the calories, she’s now one of the most powerful restaurant critics alive. More powerful than you can possibly imagine.

The beard awards were by no means the first personal slight Jay had to deal with. Even as a child, the powers that be were holding her down. As a child, Jay was sent to The Haberdashers’ Aske’s Boys’ School, a correction centre for wayward outfitters between the ages of 4 and 18. As a young woman with more interest in ham than haberdashery, this must have been excruciating. But look what she’s doing now – smashing through the glass ceilings of woman-hating restaurants up and down the country, and fully qualified to mend all the buttons on your school blazer should the restaurant critic job be offered to a better man!

Jay Rayner, you are – without doubt – our woman of the week.