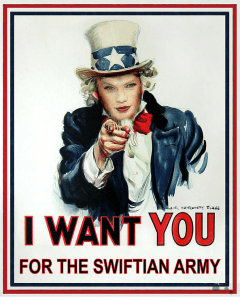 (BEVERLY HILLS, Glamourless) Rumours have been circulating for years, but an official announcement this morning has confirmed what many have long suspected: Taylor Swift has started amassing an army, and the mandatory draft will affect all American women.

The star began mobilising in the early hours of Friday in retaliation to a set of controversial lyrics aimed at her by Kanye West. The rapper’s latest single, Famous, contains the lines, ‘I feel like me and Taylor might still have sex/ Why? Because I made that bitch famous’ – fighting words as far as Swift is concerned. While it’s just the latest in a series of provocations between the two super powers, this time it really means war.

On Saturday morning, women across the United States awoke to the news of the first military draft since the Vietnam War. Swift’s chief lieutenant, Cara   Delevingne (✓), appeared in a YouTube commercial aimed at firing up female passions. Emblazoned with the headline, ‘There’s a soldier in all of us,’ Deflanganine marched forwards – guns aloft – through spilt petrol, with flames warming her well-formed backside.

By mid-morning, women were seen queuing outside hastily set-up recruitment centres, many of them looking surprisingly upbeat for such a sombre occasion. ‘I’d die for the Taylor Nation,’ said an 18-year-old in Lost Springs, Wyoming, brushing back tears as she stood to attention for her official ID selfie. ‘What she’s done for the women of Lost Springs is frankly unbelievable. You really would not believe it.’

While Swift has yet to make a direct statement, she was seen arriving at her headquarters early this morning, flanked by generals and general hangers on, including Selena Gomez, Cara Devaluvigne, Gigi Hadid and Karlie Kloss. None looked fearful. All looked fabulous.

Over at Camp Kardashian, West was said to be confused but ready. ‘Doesn’t she realise that “bitch” is an endearing word in the language of hip hop?’ he was overheard muttering. ‘It’s as friendly and liberating as “c*nt”, “whore”, “motherf*cker” or “arse bucket”. But if she wants war, then that’s what the nipple jiggler’s gonna get (no offence intended).’

Meanwhile Calvin Harris, Taylor Swift’s Scottish DJ boyfriend, was seen trying to hitch a ride out of Hollywood. ‘Half the time she cannae fuckin’ understand a word I’m saying,’ he told a passing car-load of itinerant bloggers. ‘God alone knows what kinda Armageddon I mighta unleashed. Can any of you give me a ride back to Dumfries?’

While war remains officially undeclared, we expect escalations to this story imminently. Keep your eye on Glamourless for the latest news.