Royalty is really special, isn’t it? Your man is, too. So, because it’s the Queen’s 90th birthday today and we know how much our readers really need help with this kind of thing, we experimented with 10 ways to make men feel like princes (which is royalty). Here they are, then.

It doesn’t matter whether you sing like Bono or a trapped boy, he’ll feel really royal if you break into song at any unsuspecting moment. It’s how Camilla bagged Charles, apparently (more trapped boy than Bono, by all accounts).

2. Hold his hand, or his penis, all of the time

As with the singing, he’ll really appreciate it if you reach out and grab at his appendages whenever you get the chance. But only for a second, otherwise you’ll seem clingy. Grab and release, grab and release – that’s the secret. On special (but no less frequent) occasions, give more attention to his penis. Snatch at it. He’ll feel really royal as a result. If you’re out on the street, try linking arms with it (it’s how Fergie bagged whatshisname, apparently).

Offer to carry his purse for him, open the doors for him, burp him when he’s gassy – but know when to draw the line. If he’s prone to throwing tantrums, be prepared to send him to his room. Edward is always in his room.

4. Thow rocks at his window in the night

Shakespeare (who has been famous for almost as long as the Queen) made chucking pebbles at girls’ windows a thing, but that was 400 years ago. The world has moved on since then, and women are more empowered. Use that power to heft chunks of concrete through his window on a summer’s night. There could be nothing more romantic! And, if you’re naked and crying, you’ll make even more of an impression (just like Kate did in her student years).

5. Pick him up, tickle him, wrestle the bastard

In keeping with the empowered women theme – play-wrestling is what he likes to do with you, so take it a stage further. Perfect your diving elbow drop (the Queen Mother has this down pat). He won’t know what hit him, but we guarantee he’ll like it.

6. Slow dance with him, even when there’s no music playing

7. Carve your name into his trunk

Back in the day, you could get away with carving your names into a tree. Even King Richard III did it halfway through the Battle of Bosworth. But let’s just say there are a lot of trees with a lot of names and a lot of people to forget they ever carved them. So carve your name into his trunk. Nobody is going to forget an incident like that in a hurry, and you’ll have the restraining order there as a reminder if you ever start slipping.

8. If a girlfriend is bothering him…

…then it’s within your rights to kick the shit out of her. Simple as. It’s what the Queen does when someone throws Philip shade. 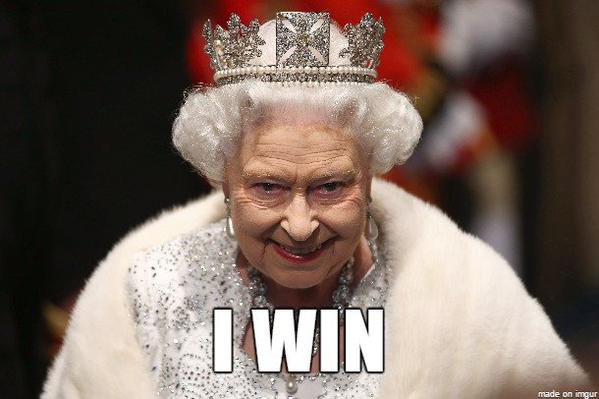 9. When you’re both talking to other people…

…make sure you’re straddling him. Throughout the conversation and beyond, if your thighs are up to it. And for that added extra, nothing says ‘you are royalty’ more tenderly than fitting him with a girdle (again, Camilla-style).

…and hold him by the cheeks. Tell him you love him more than anything except cheese (strictly by royal appointment – none of your Lidl crap). Do this every hour, on the hour, otherwise he might forget.