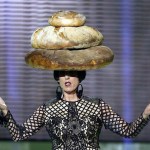 (GLAMOURLESS, Madrid) A woman recently seen walking the streets of Majorca wearing the contents of a bread basket on her head has been described as ‘two sandwiches short of the full picnic’ by a concerned friend.

The woman – well known in the fashion industry – is thought to have combined her passion for haute couture with her devout religious beliefs, resulting in what fashion insiders have described as an ‘undignified, but quite moreish’ headpiece.

She is believed to have taken the style decision in the run up to Lent, an annual festival of self-deprivation observed by Christians the world over. A colleague (who wished to remain nameless) told Glamourless, ‘She has been on the low-carb diet for some time now, but wanted to do something a little more extreme in the name of God and fashion. The temptation to get stuck in to a farmhouse bloomer is ever-present, but she’s doing fantastically well at the moment. The crumbs are certainly an inventive way to hide any dandruff mishaps that may occur, and she smells absolutely fabulous.’

Her local priest had little to say on the matter, but did draw attention to the fact that her outfit is likely to go stale sooner rather than later. ‘Fashion is a fickle mistress,’ he intoned from a two-storey pulpit during this Sunday’s sermon. ‘If she thinks she can carry that off for another week and stay on trend, she’s got another think coming.’