Valentine’s Day is looming and, like most women, you’re probably wondering how best to send out the simple but vital message: keep your hands off, yer bastards – this twat’s mine.

After all, Valentine’s Day is a toughie, especially if (like most British women) you don’t have a job because you believe that your own place is in the bedroom. And while you’re busy trying your best to look pretty, he’s out at the office, most probably taking ‘Carol’ up the lift shaft. Come Valentine’s Day, Carol’s on heat, and your man – being a simple beast, after all – is completely powerless to resist.

So, what do you do? The answer is simple. You follow this step-by-step Glamourless guide to marking your territory. Carol won’t know what hit her.

Turn up the romance

Woo him with words. You could write some yourself, or – if you’re incapable of channeling Shakespeare – buy something classy from Hallmark, or some other card shop. One of our Glamourless readers sent us the photo above. As far as we’re concerned, that ticks all the boxes.

Do it doggy style

By which I don’t mean what you think I mean. C’mon, girls! I’m not that crass. We needn’t stoop to Carol’s level to get what we want. No, all I’m suggesting is that you mark your territory in a canine way.

First, steal his door key, then eat a few sprigs of asparagus and cock your leg over him just as he’s about to leave for work (incorporate the ‘Way of the Pigeon’, if you can muster something a little more solid). Kick him out the front door and lock it firmly behind him. Carol won’t want to know when he gets to work smelling like a rural gaol. 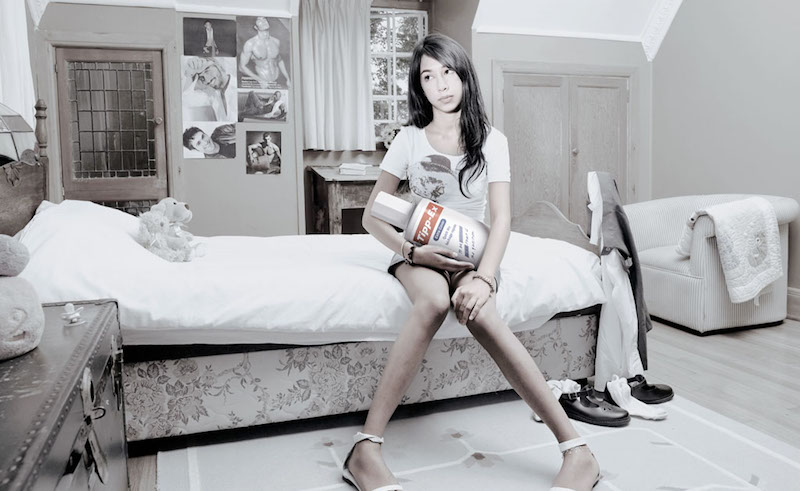 No need to invest in a cattle iron – a simple vile of Tippex and an exposed forehead should do the trick. You’ve probably not done this since you were a student, but that’s okay – it’ll be a nice chance for you to finally put some of the things you learnt at university to good use.

Here’s how it works. You need to brand him while he’s sleeping, and then you need to keep him away from a mirror, ideally until he’s face to face with her. In the case of most foreheads, the wording you choose will need to be short and fairly direct (although I know this one guy whose forehead could comfortably take the Bible, so this really depends on what you’ve got to work with.)

What you write also depends on your situation, but here are a few all-purpose suggestions.

Tip: make sure you’ve got the comma in the right place, otherwise you’re kinda shooting yourself in the foot.

(Come to think of it, this one could backfire, too. Sinister as it sounds, knowing Carol as we do, she probably likes that kind of thing.)

We like this one, because it’s a wider statement and far less Carol-centric. However, onlookers may read this as a signal of homosexual intent, and that’s a whole different paddock of ponies. Only follow this course of action if you’re sure you’re comfortable with his sexuality.

Tread carefully, Glamourlesspusses, and – as always – let us know how you get on.