(GLAMOURLESS, London) Designers displaying new collections at London Fashion Week this year have announced that they intend to share the common theme of ‘practicality’.

‘Gone are the days of catwalk styles that aren’t practical for the high street,’ said a spokesman for fashion icon Stella McCartney. ‘Designers are determined to close the distance between the fashion boutiques and the average woman shopping for her clothes at Lidl or Argos. Not that we’ve ever visited any of those shops, of course, but we think we have a rough idea of how they roll.’ 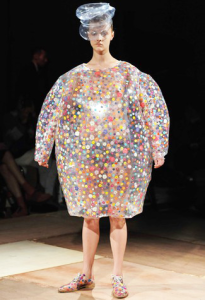 ‘Zorb Desperado’, he explained, was intended for the ordinary woman who had to subject herself to the dangers of the weekly shop. ‘It’s dog eat dog out there in the Tesco aisles of a Saturday afternoon,’ he added, ‘So I put this together for anyone hoping to brave the discount shelves unscathed, while keeping their sense of style and dignity well and truly intact.’

Meanwhile, ‘Dentalism’ was, he said, intended for women (or men) who had a lengthy dental operation booked in, and he considers it his pièce de résistance. ‘I created this look with both the 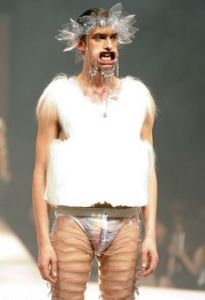 average dentist and their fashionable patient in mind,’ he told Glamourless. ‘The headpiece is simply for style and – again – a natural sense of dignity. The mouth brace is purely for dental practicality. I’m shocked to say that I am the first fashion designer to really consider the dentist’s plight, so I’m really pleased with how we’ve tackled the ‘slack-jaw dilemma’ that so many dentists and their hygienists encounter each day, the world over.’

‘Dentalism’ also takes into account the length of more difficult operations. ‘As you can see, for toileting reasons we’ve made the pant zone more easily accessible and thoroughly waterproof, and I’ve patented a ‘cock socket’ to direct leakage down tubes encircling the patient’s legs. The furry top is my only nod to conceptualism. I wanted to pay tribute to toothpaste itself, and I’m sure dentists and patients alike will find they simply can’t do without that natty little addition.’

London Fashion Week, now in its 32nd year, runs from February 19 to 23, and is centred on Soho. Security is at an all-time high this year after a group of models escaped from their paddock in 2015 and ran amok in the English countryside. ‘That simply can’t happen again,’ explained a police official. ‘The average Brit simply isn’t used to that level of haute couture. People panicked. We had to open branches of Primark 24/7, just to maintain a semblance of normality.’