Sure, it’s great in jam, and in a crumble it’s well known for reaching temperatures close to those at the earth’s molten core. But have you ever actually thought in any depth about rhubarb?

We’ve delved into the realm of investigative journalism to bring you this exclusive: not only is rhubarb nothing like the jolly, two-tone, leafy-haired friend you thought it was – its motivations and ultimate plans are extreme and sinister.

Rhubarb laughs in the face of superfoods. What can a superfood do apart from boost your immune system and reduce your risk of chronic disease? Oh no. Don’t waste space in your brain for superfoods – it’s supervillains you want to watch out for. And rhubarb is not only a supervillain – it’s gathering its forces and preparing itself for a crop-based uprising (this is far more dangerous than it sounds).

Here’s what you need to know about rhubarb so you can begin to prepare yourselves for the inevitable and dreadful fate that awaits you.

It hides in the darkness

You may have seen the recent BBC piece on Yorkshire forced rhubarb. Born and raised in so-called ‘forcing sheds’, these rhubarb are justifiably furious, united in their hatred of humankind and only getting stronger with time.

You can hear it crack as it grows

Think of a fire that spits occasionally – that’s what rhubarb’s doing. The main difference is that these cracks are actually tiny curse words emanating from the plant, intended to slowly and steadily undermine their human guardians until the stress and loneliness of the situation drives the humans to bury themselves next to the rhubarb in the dark.

The word rhubarb can also mean ‘heated argument or debate’ 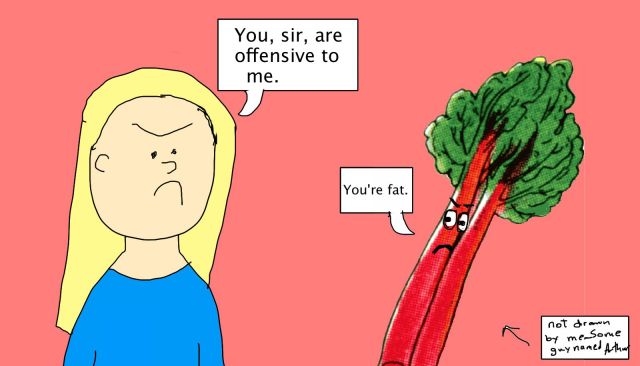 Says it all, really. Aggro.

The redder the stalk, the angrier it is

So when you see an army of rhubarb approaching your front door and you have, despite all warnings against it, stayed in your home instead of taking to underground shelter, go for the palest-stalked member of the group. Try to reason with them. The red ones will attack you without warning or remorse.

It can walk, talk and stab

Oh, didn’t we mention that? Yeah. Those stalks are mighty sharp. And those forced ones from Yorkshire can get really sadistic, too. So stay away from rhubarb, and, if you have some growing in the garden, be sure to give it plenty of light and respect. Don’t force it into a shed.

You have been warned.